Conky: Some great looking conkies for your linux desktop

Conky really can make a desktop look a lot more attractive. If you are not familiar what is a conky, definition is given below from the mother site:

"Conky is a free, light-weight system monitor for X, that displays any information on your desktop. Conky is licensed under the GPL and runs on Linux and BSD"

I was searching for some great looking conkies yesterday and found some really cool ones.

But, for n00bs, you need to install conky from software repository. In terminal, type
$sudo apt-get install conky-all

For debian, type it without sudo in the root terminal. It's a small file with will get installed in seconds.

Conky lua is currently my favorite and I am using it for both my computers. 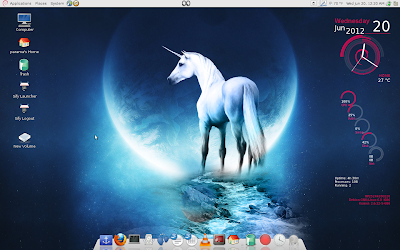 Doesn't it look awesome? A more closer look at the conky:


Lua has versions for Debian, Ubuntu, Fedora, etc. Download the file from here. Instructions to install are pretty simple:

You can put it at the startup applications to automatically start the conky, whenever your computer is switched on. It works well with Ubuntu 12.04 LTS and Debian Squeeze - I have checked both. Works well with XFCE as well.

Also other conkies which caught my attention, I have used some but haven't all in the list below. The links to download the conkyrc and other files are given below with a glimpse of the conkies.

These are some of my favorite conkies. You can check Gnome-look for more conkies.

In most of the cases conkies are easy to configure. Also, they make desktop really cool. Try out some conkies if you are using Linux.
Posted by Arindam Sen at 12:47 PM