We have all seen Ubuntu 13.10 and the incremental improvements that it brought. Though the distro in itself was really good but it wasn't something tempting enough to actually leave Ubuntu Precise, the LTS one with support till April 2017, and adopt Ubuntu Saucy Salamander, with 6 months of support. At that point in time, I thought Mint would make it's release pretty soon. So, ultimately, on the last day of November 2013, the Linux Mint 16, named Petra, is out with it's home grown desktops, Cinnamon and Mate. I thought still 4+ months support is remaining for Saucy and hence, possibly worth trying.

I downloaded the 32-bit ISOs (with pae kernel and hence, works very well with 64 bit machines), each about 1.2 GB in size and installed them on separate partitions on my two machines: 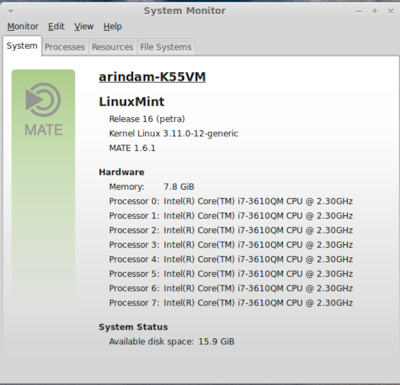 Like Ubuntu Saucy, Linux Mint 16 ships with Linux Kernel 3.11.0 with Cinnamon 2.0 and Mate 1.6 desktop environments. Except for the difference in DE, there is little to differentiate between the two distros. First I take up the incremental improvements that are in the release notes and additional improvements that I experienced during my usage.

2. The ability to play sounds when common events like starting Mint, switching desktop, minimizing or maximizing windows. Good that only few are enabled by default and users can manipulate the settings as per individual preference. Otherwise, too much of sound may be a bit distracting to regular use.

3. A new applet to perform session and account related tasks. It is very functional and welcomed addition. Also, the functionality of changing login pictures, password and name is a good addition to make Cinnamon more functional.
System administrators have now a tool to manage users and groups in Cinnamon.

4. Edge tiling is perhaps the most catchy addition that I experienced in Mint Cinnamon. Pressing "Super+L+right/left/top/down arrow" after clicking any window places it tiles on one of the edges. It was already there in previous releases but it is more fine tuned now.

Another impressive feature is edge snapping though I didn't use it much. Hence, no screenshot. The release note states:
"Edge-Snapping is the most impressive feature in Cinnamon 2.0. It was inspired by the Snap functionality of Xbox One. It is similar to Edge-Tiling (the window sticks to the edge or corner of the screen, occupies half of the screen and can be resized) but with one key difference: Maximized windows do not cover snapped windows".

5. Nemo improvements: Nemo 2.0.8 is now loaded with a host of features and better aesthetics. It works a lot faster, support more programs than previous versions and allows to monitor progress while copying or moving the files. Another welcome addition of a more versatile file manager.

6. New login screen: MDM 1.4 with a new attractive interface to allow login and switch between users along with enabling features like autologin.

7. USB Stick Formatter: A new tool to easily format USB to NTFS, FAT32 and ext4. It is a very required addition, I feel, for users like me who use pen drive regularly for Linux testing. The formatting functionality is present in GNOME 3 but not in KDE or any other DE. Good that now Cinnamon has that capability.

9. Faster boot and login: Previous Mint releases used to be slower compared to Ubuntu releases. I reported that while comparing between Mint and Ubuntu earlier. Thankfully this version boots much faster and is comparable to the boot time taken by Ubuntu Saucy.

Other features that I experienced while using Mint Cinnamon are:

10. 116 Cinnamon themes to decorate desktop - some are quite good but quite a few are trash as well. Now Cinnamon is building an ecosystem similar to KDE, I suppose. The default theme is also appealing aesthetically and looks very professional.

13. No unwanted issues like USB or external hard drives not auto-mounting, or inability to edit stuff in USBs, etc. which kind of limit user experience. Mint is possibly the most user-friendly Linux distro I've used. Period.

Improvement in Mate version
Mate version is comparatively poorer in terms of DE improvements. It has # 6 to 9 and 11, 13 to showcase in this version. Further, look-wise Mate is paler compared to Cinnamon.

Now I move to my regular stuff, taking each aspect of the distro one-by-one.

Aesthetics
As discussed, aesthetically Cinnamon looks much more appealing with it's black panel and good looking menu. Developers paid a lot of attention to details no doubt - it is evident right from boot splash and login screen to application interfaces and font rendering.

Mate, on the other hand, is a bit paler in comparison and didn't appeal to me much.

Same holds for Nemo versus Caja. Nemo looks better than any other file manager I have used.

Another important thing I would like to mention is application interface optimization. For example, LibreOffice Calc, I use it a lot and in many Linux OS I face the issue of either the worksheet navigation tabs disappearing altogether or too small for legitimate viewing. In Linux Mint 16, they appear perfect. I guess Mint developers can give a lesson or two to other distros about aesthetics. It is not just limited to creating a catchy interface but also giving adequate attention to details.

Hardware Recognition
Hardware recognition of Linux Mint is top notch and I didn't face any issue with the release. Only one issue I faced after installing bumblebee in Mate - for sometime the network icon showed no connection though I was connected and was able to browse internet. Possibly a bug but luckily for me things came back to normal after an update and reboot.

Touchpad is supported well by both though I had to manually enable vertical scroll and tap functions. Now one interesting thing I observed, like Ubuntu 13.10, the touchpad gestures in Mint 16 function in opposite direction to previous releases of Ubuntu/Mint or any other Linux distro I've used. It is a bit uncomfortable to use initially but gradually I got used to it.

Installation
Installation is same as before for both and no Ubuntu One login during installation in Mint! The steps are usual and no surprises there. It should not challenge even a Linux novice to install Mint.

Applications
Both Mint Mate and Cinnamon ship with almost similar application sets (though Mate has some of it's own homegrown apps like Eye of Mate Image viewer, Pluma 1.6.2, etc. but Cinnamon has their GNOME 3 counterparts). I give here a list of the prominent applications:
Mint 16 ships with all multimedia codecs and Adobe flashplugin pre-installed. Further, language support of Mint is very good and I could easily internet content in my vernacular language, Bengali.

Compositing is enabled by default in Cinnamon but not in Mate. In Mate, I had to manually enable compositing from Settings manager -> Desktop Settings.

Every application worked out of the box in Mint, I must say. I guess this is the beauty of Linux Mint - it just works.

Software sources is a good addition in this regard to manipulate the official repositories and user added ppa's.

You can see here the third party ppa's I added in PPAs and Additional Repositories.

I downloaded Skype 4.2, Virtualbox 4.3 and Chromium through MintInstall and Google Chrome through gdebi. All of them got installed resolving all dependencies and worked without any issue.

Installing Bumblebee for Nvidia card support
With Ubuntu Saucy experience, I didn't take any risk in Linux Mint 16. Straight away I added bumblebee ppa and installed bumblebee to my Asus K55VM with hybrid graphics. Laptop heat came down significantly and I got prolonged battery life. The commands I used are given below:
sudo add-apt-repository ppa:bumblebee/stablesudo apt-get updatesudo apt-get install bumblebee bumblebee-nvidia primus linux-headers-generic

Performance
Now the most interesting part - performance. To my surprise, Mint 16 Cinnamon actually felt better to use than Mint 16 Mate. On the same machine, both recorded comparable resource usage, with Cinnamon marginally better. Undoubtedly Cinnamon developers have put a lot of work in fine tuning Cinnamon 2.0. Also, I received better battery backup in Cinnamon.

If I compare Mint 16 Cinnamon and Mate's performance to other GNOME 3 / derivatives released in 2012/13, both feature in the top 15 distros I've used. All the statistics are recorded from 32-bit versions under comparable scenarios with task manager/system monitor running and in various point of time during 2012/13.

Notably Mint 16 consumes nearly half the RAM of Ubuntu 13.10 and 80-90 MB less RAM than Ubuntu 13.10 GNOME. It definitely speaks a lot about the kind of effort the Mint developers have put in. Further, in all the observations about you see that Cinnamon consistently perform better than the Mate cousin.

Overall
I felt really comfortable while using Mint 16 Cinnamon in particular and unfortunately don't feel like going back to my main OS OpenSUSE KDE. Mint has done it's magic again! Though the Petra release took a bit of time than I expected, but more importantly, it is bug free, stable, offers a lot of goodies and is extremely pleasing to work with. It is definitely the best Cinnamon release I used from user experience point of view. However, the caveat is that the support is only for 4 more months and installing it may not make sense for core Linux users. But, it augurs well for the LTS release to come in April 2014. I am definitely looking forward to Mint 17 Cinnamon spin.

Mate is also good and performs similar to Cinnamon but offer less user satisfaction. It may be that I am not a big fan of Mate and hence, possibly a bit of bias in my opinion. To me, Mint 16 Mate is not aesthetically as pleasing or doesn't offer better performance compared to Mint 16 Cinnamon. Hence, my choice is clear.

So, from my side, Mint 16 Cinnamon is highly recommended to all those who are looking to try out Linux and distro hoppers who always want to try out something new. You won't be disappointed with Mint 16, it has plenty to offer.

You can download both 32 and 64 bit versions from here. It has both with codec and no-codec versions. Normal users would be better off using the version with free and non-free multimedia codec version.
Posted by Arindam Sen at 12:48 PM