A week in replacing Ubuntu 12.04 LTS with Ultimate Edition 3

Yup, I bought a laptop with 3rd gen i7, 8GB, 2 GB Nvidia GEForce 630M & somehow I wasn't able to totally configure Ubuntu with compiz config to get the desired effects. So, once I saw the Ultimate Edition 3.4 note on distrowatch, I booted it up in my virtualbox. It won't load well on VB, and finally I decided to give it a try. Anyway, it is based on Ubuntu 12.04 and how bad it can be!

I downloaded the 64-edition from Sourceforge - it was more than 3 GB! I expected that it would contain a lot of relevant software. But, what I saw was somewhat mind-blowing and somewhat frustrating as well.

Installation was just like Ubuntu 12.04 LTS and it just replaced my earlier installation of Ubuntu without much pain. It downloaded a few updates while installing and I guess it would be around 30-40 MB download - primarily of language packs. 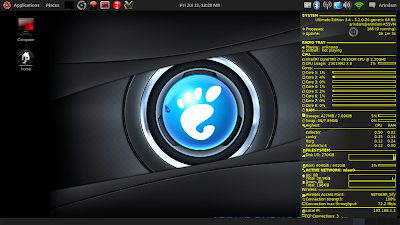 I was greeted with a Gnome fallback interface with a very colorful screen - predominantly red and black! The interface is typically a bit loud and enabled with all kinds of special effects. Even simple browsing through the menu or right click would see paper planes flying before your eyes & unfolding the menu! Surely, the developers have gone overboard on the special effect piece. However, one good thing, my Nvidia cards are getting utilized!

App-wise, I guess I had to download only VirtualBox. Rest of the essential apps are already there in the installation 3GB ISO, along with 100s of other apps which have very little chance of me using them. Given below are the menus for Office and Accessories - Office has LibreOffice suite, Calligra Office suite, Abiword, Gnumeric along with a host of applications from Gnome & KDE distros. Similarly on accessories too, you are confused (to some) or pampered (to others) with plethora of options. 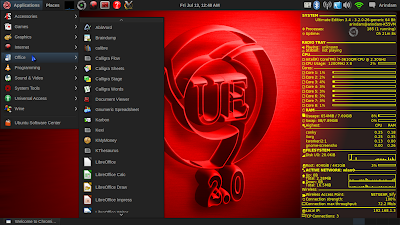 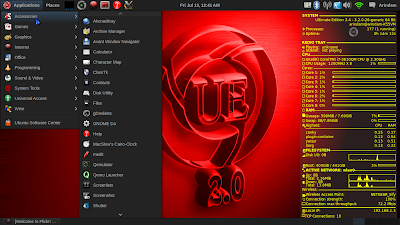 Somewhere, I have a feeling not much thought went into judicious choosing of software. However, a bright side is that I can always uninstall the apps which I don't require. More more screenshots and apps in my Flickr account.

Once I recovered from getting inundates with applications, I tried redesigning it and in the login screen I selected Ubuntu Unity 3D. It actually screwed up the entire interface and even when you login selecting Gnome, the Unity interface would overlay on the Gnome interface. I searched a bit for the solution but didn't get any. Also, all the special effects are gone with Unity 3D. Then, I reinstalled the OS with a pledge I won't try any other option from the login screen!

Functionally UE 3.4 is good but I often get crash reports and my computer just froze twice in 4 days. I had to do a hard stop and it is quite unusual for a linux distro. Stability of the distro is an issue and hence, I had to abandon it after using to for a month or so. I found Linux Mint 13 Cinnamon to have better stability over Ultimate OS.

CPU & RAM Usage
Of course, it would be higher than Ubuntu 12.04 LTS. The conky on the desktop gives CPU usage of the eight processors (quad-core, 8 threads) along with RAM usage every moment. Without anything running, it is about 1-5% CPU & 420-500 MB RAM. Pretty decent!

One word of caution, this OS is meant for high end computers and won't run that well on low resource environment. I guess you understand it by now as well after reading the above portions of my review.

Overall
Overall, Ultimate Edition is a very powerful distro but not much polished. Too much of color and loudness doesn't make something beautiful and simply put, it lacks aesthetics. However, hard work from the developers shows while using the distro barring a bit of glitches here and there. A little bit of aesthetic designing would definitely add value to the distro. Further, a lot of work is required to improve the stability of the distro.
Posted by Arindam Sen at 12:21 PM