Clemens Toennies has announced the availability of Netrunner 2014.09.1 "Rolling" edition, a Manjaro-based distribution featuring the KDE 4.14 desktop: "This is the release announcement of Netrunner Rolling 2014.09.1. We are releasing this maintenance shortly after our initial 2014.09 release to fix problems with the NVIDIA driver, and to include a first fix for the Bash shell vulnerability. We also updated Samba file sharing, Kontact accounts and language pack installation. Laptop Mode Tools was replaced by the new TLP to give you better control of your power consumption and achieve a longer battery life with your laptop. With the 2014.09 version we updated Netrunner Rolling to the latest software updates from Manjaro, including Linux kernel 3.14.18 with lots of bugs fixed and new driver support. KDE SC was updated to version 4.14."

To be honest, I am a big fan of Netrunner OS (the Ubuntu version) specially for superb aesthetics. KDE itself is quite beautiful and Netrunner developers actually managed to make it look more slick and add improved functionality. I had used Netrunner Arch / Rolling previously and had written a review of Netrunner Arch. I thought this is a good opportunity to review it this week. So, I downloaded the latest update of Netrunner Rolling - the 64-bit 2.4 GB ISO for this review.

I created a live USB using Linux Mint Image Writer on a 4 GB USB drive. I used my Asus K55VM for this review.

The default wallpaper looks good and gels with the overall theme. The Netrunner Frontier wallpaper is also present in the wallpaper section along with some more attractive options.

Netrunner is, on the overall, more polished in looks than Manjaro. I didn't fancy the Manjaro KDE spins to be very aesthetically pleasing for it's loud and rather unpolished all black theme desktop. Netrunner looks more soothing to the eyes for sure.

Further, boot splash is graphical with Netrunner logo and looks pretty cool. Login screen has 4 different options of which Maui is the default one. It looks good.

Font rendering is similar to Linux Mint and is very comfortable to the eyes. Initially the icons and folders appear too large but from View -> Zoom Out or using Ctrl+-, it can adjusted to user customized level.

Like other KDE distros, animations and special effects are enabled in Netrunner as well. Desktop cube is enabled by default but manually I had to increase the virtual desktops to 4 before it could show up. To manually enable/disable effects, go to Menu -> Settings -> System Settings ->Workspace Behavior -> Virtual Desktops. Increase Number of Desktops to 4 and click on apply. Next you can see your desktop taking a cube shape by pressing Ctrl+F11. If not, check Desktop Effects in the same Workspace Behavior option. Further, you can put different options (like minimize all windows, maximize windows or start a program, etc.) from the Screen Edges in Workspace Behavior.

In overall, I guess Netrunner Rolling desktop looks way better than stock KDE interface and as good as Netrunner Frontier, in all aspects. I go with a 100% score on aesthetics.

Netrunner, like Manjaro, could identify accurately my laptop's screen resolution, touch pad, sound card (sound is good, I must say!), Wifi, LAN, etc. Everything worked as it is supposed to work and full marks to Netrunner for the same.

Installation
I installed Netrunner Rolling on a 50 GB partition from the live USB. Installation steps are pretty simple and includes the following steps:
(1) Choose language, location
(2) System Check
(3) Geographic location
(4) Keyboard layout and language
(5) Manage partition to install Netrunner
(6) Create user ID
Just a reminder, the installer is the beta one. However, it worked for me perfectly and I was able to install Netrunner in just 10 minutes.

However, post installation, may be due to conflict in graphic card drivers (my laptop has Nvidia 630M graphic card), I landed up on a black screen. However, in next reboot everything worked perfectly and I am using it for the last 4 days without any pain.

Pre-Installed Packages
Netrunner Rolling has an interesting mix of KDE and non-KDE packages and is mostly devoid of the KDE bloatware, namely:
Firefox is the default browser and it comes loaded with plugins and add-ons, namely:


Adobe flash and multimedia codecs are pre-installed and I could play my favorite media online/offline right after installation.

Another great thing about Netrunner is that during installation, it detected my NVIDIA graphics and installed bumblebee (with nouveau) to save some time and effort from my side. Actually I found it really good for Linux newbies and non-techie persons who may not exactly know what graphic cards are installed in their computers or even if they know, may struggle to install graphic card drivers. Pretty neat work from the developers, I must say.

Bash Shellshock Patch
Now media is quite abuzz with the prospect of bash shellshock and the potential consequences it can have. Ubuntu has already released a patch for the same. Upon installing Netrunner and issuing an update, I found a bash update immediately after installation, as shown below. So, no worries there and people who are using antiquated operating systems without any support - this is the time you can install/upgrade to a newer supported Linux operating system to avoid any risk. 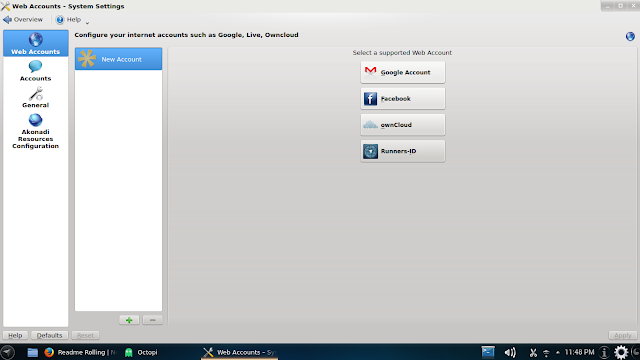 Netrunner System Settings looks a bit different from normal KDE settings. It takes a bit of time to get adapted to it, if you are more familiar with the conventional KDE settings. However, the change is pretty minor - some items in settings are merged in Desktop Appearance and Workspace Behavior.

Apart from the usual Settings Manager, Netrunner has an additional Manjaro Settings Manager to control for some of the additional functionalities. However, most important of them are the language support, Linux kernel and Hardware Settings. I used the hardware settings to check if the OS is detecting my laptop's hybrid graphics. Further, it can be used to install proprietary Nvidia drivers (nvidia-prime) if you find bumblebee to be less efficient.

I found the Linux kernel option quite interesting. It shows the kernel in use and the latest available kernels. As mentioned, Netrunner ships with the LTS kernel 3.14.18, but here it gives option to install more recent kernels like 3.16 or 3.15. I found it quite good for users who want to experiment with their distro or who would require the recent kernels for more advanced functionality. This is also a good option provided by the developers.

So, in overall, I am very happy with what I saw in Netrunner as far as the pre-installed packages are concerned and I go with full marks for this section.

Repositories
Netrunner stays true to Manjaro base and sources it's primary packages from Manjaro repos and additional packages from Yaourt or user repos. Octopi 0.4.2 is the default interface to browse and download packages. It is pretty fast and looks similar to Synaptic package manager. It may be a bit daunting initially for new users (more familiar with Linux Mint / Ubuntu Software Center). However, I feel with regular use, you can start appreciating how much better Octopi works. The packages are grouped into categories on the right hand side panel and there is a find option at the top which I found pretty helpful to locate packages and install them.

From the repository editor, I could see core, extra, community and multilib Manjaro repos along with blueshell or Netrunner repositories configured in this distro. There is an option to add more in custom.

Further, there is Yaourt. If you want to install anything from yaourt repos, just issue the command yaourt -S <package_name>, like I used the following one to install Google-Chrome:
# yaourt -S google-chrome

Performance
On my laptop with 8 GB RAM and Core i7 processor, Netrunner Rolling worked very smooth. Normally all operating systems run pretty smooth on this machine, given the high end specs. However, resource consumption was slightly higher than average KDE distros I have checked over 2013-14 on this machine. At steady state, Netrunner Rolling consumed about 870 MB of RAM which is 55% higher than average KDE distros tested on the same machine. The main reason for the same is pre-loaded Firefox (on machines with more than 2 GB RAM) which consumes about 200 MB RAM. Once preloading script is stopped from startup, RAM consumption drops to about 640 MB, still 14% higher than average KDE disros.

However, a great thing is that the bootup time is pretty fast. On my machine, Netrunner Rolling took about 49 seconds to boot (with autologin enabled), which is 4% lower than average KDE distros.

Overall
Netrunner Rolling is, no doubt, a more refined distro than it's parent Manjaro. It retains all the beauty of original Ubuntu based Netrunner and adds the semi-rolling release of Manjaro or Arch based systems to it. So, in nutshell you get the best of both the worlds from this distro. Some good aspects of Netrunner are easy installation, automatic configuration to detect graphic card and install corresponding drivers, options to install recent Linux kernels, integration of yaourt repos and of course, a stunning and professional design.

However, I found the operating system to consume slightly more resources due to preloading of several applications on systems with more than 4 GB RAM. It definitely helps to launch applications quicker and given today's modern powerful machines (where 4 GB RAM is actually the norm), I guess users won't find any issue with it. During my usage, hardly at any point with multiple applications running, did the RAM consumption crossed 3 GB.

Netrunner Rolling is highly recommended from my side to users who are tired of re-installing Linux OS every year and LTS versions don't appeal to them as they lack recency after a certain point in time. I am using Manjaro for last 2.5 years and survived multiple upgrades without breaking the system and I guess the same stability is also there in Netrunner Rolling. For Netrunner Rolling, I go with a score of 9.4/10 which is the second best score to any KDE distro this year after Chakra.