[SOLVED] How to fix the black background of Cairo Dock?


To be honest, I am a big fan of Cairo Dock. It makes my desktop look more beautiful than what it would have been without Cairo Dock.

I was using it from the beginning of my Linux journey, in Ubuntu 11.04. Of course, I am a newbie to Linux, just started using it couple of months ago. And it has been a real learning experience. I used to hate Windows from the beginning - since Windows98 but never had the guts to try out Linux. I am a gadget freak but not really a tech guru!

But, a recent crash of Windows XP changed my view forever. I have a HP Compaq desktop which I bought way back in 2003 when I got admission to IIM Ahmedabad. Since then it has been my companion - from Ahmedabad to Bangalore (when I joined my first job after a Management PhD in 2008). I have written my thesis on it, downloaded and watched countless number of movies (I am a movie buff), romanced my would-be wife (and now mother of my cute little angel!), played a lot of games, etc. etc. The list is endless.

Couple of months ago when my Windows XP crashed and I tried reinstalling it again with the official HP and Windows XP SP1 CDs, I realized that with SP1 I won't be able to run a lot of my favorite softwares in my P4, 1 GB DDR RAM PC. I upgraded it to SP3 but it again crashed. Then came a realization that I can try Linux for my 11 year old friend. A little bit of net browsing on my backup Asus EeePC popped the name Ubuntu. 11.04 was the flavor of Ubuntu those days. Immediate installation, some experimentation to make my Sify connection active started a journey of gaining knowledge on the unexplored territory - LINUX.

I realized Linux distro are not that intimidating as I thought initially. Now even my wife (very little tech oriented) and my mother (who can barely use a computer) are able to use it without much fuss.

Well, a long prelude! But, I am now a bit sentimental about Linux distros. Real saviors for those who hate unstable Windows and lousy office.

Coming back to Cairo dock - since then I have been using Cairo dock in Ubuntu.

I installed Ubuntu 11.04 in my Asus EeePC 1101 HA as well - but the netbook hardware seems to not like Ubuntu much. It was much slower than my PC. However, the Cairo dock was working perfect. Not satisfied with the speed, I installed Lubuntu LXDE desktop. And true to it's name, it was much lighter than the GNOME shell of Ubuntu 11.04. And I got the speed I like.

But the Cairo dock had a problem in Lubuntu 11.04 - an irritating black background!

And that's it! Now look at my beautiful Lubuntu 11.04 desktop with Cairo-dock (no OpenGL). It is faster, smarter and looks stunning! 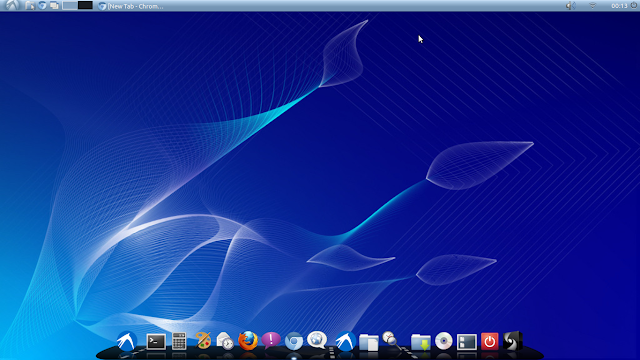