On 16th May, 2012, Clement Lefebvre has announced the availability of the release candidate for Linux Mint 13 - in MATE and Cinnamon flavours: "The team is proud to announce the release of Linux Mint 13 RC 'Maya'. Available in two editions, Linux Mint 13 features the choice between a productive, stable and mature MATE 1.2 desktop and the brand new, modern-looking and exciting Cinnamon 1.4. These two desktops are among the best available, they're perfectly integrated within Linux Mint and represent great alternatives to GNOME 2 users. Linux Mint 13 is also an LTS (long-term support) release and it will be supported until April 2017."

Linux Mint 13 release may be quite historic, in a sense when all linux distros, especially Ubuntu, have moved / moving to Gnome 3, Mint comes up with a Gnome 2 mix and LTS, supported till April 2017. Further, Cinnamon edition might take Gnome 3 to a whole new level, offering similar customization as Gnome 2.

Really nothing can exciting than this! Personally, I never liked Gnome 3, as it made my computer a tad bit on the slower side and is not amenable to customization. I was surviving with Xubuntu 12.04, 3 year LTS and Lubuntu 12.04, not an LTS (which again I replaced with Kubuntu 12.04 LTS, 5 year support but a slower distro). Finally Linux Mint 13 LTS came as a savior!

I downloaded and installed the Mate 1.2 desktop release, as its derived from Gnome 2. The old Gnome 2 desktop is back again and I modified it a bit, as in the screenshot below: 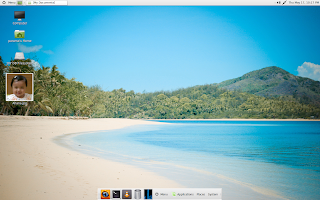 It's a slick distro with CPU usage of 8% (without any programs running) and RAM usage of 177 MiB. CPU usage is comparable but RAM usage is slightly higher than Xubuntu or Lubuntu (my earlier post) but Mint is more complete as a package than any of the Ubuntu clans.

Mint is traditionally known to pack the preferred software packages along with the usual ones you get in Ubuntu. VLC player would be there in the DVD, along with Flash support and GIMP. Plus you can access the Ubuntu software center to download all the softwares of your choice.

Firefox is the preferred browser and it has Firefox 12.0 just like the Ubuntu 12.04 release. LibreOffice fills the office software slot along with Thunderbird as the default e-mail client. Thunderbird is very easy to configure with the common e-mail sites like g-mail, etc.

In overall, Linux Mint 13 LTS is a very timely distro and Gnome 2 lovers will definitely be tempted to switch from Ubuntu 11.04 or 11.10. Art-work is absolutely fantastic as you can see in the snapshots below: 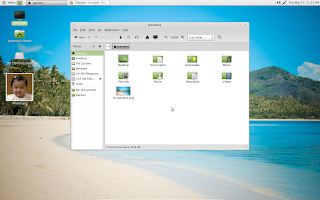 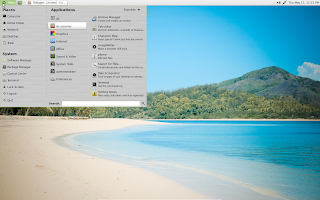 Earlier I used Mint very sporadically and shifted back to Ubuntu finally. But with this release Mint has won my heart and from now on, I'll be using it on a regular basis, for sure. Thanks again Mint for bringing Gnome 2 back!

You can download Linux Mint 13 from:
http://www.linuxmint.com/release.php?id=18
Posted by Arindam Sen at 11:00 AM